Many Canadians — and people all over the world, frankly — tend to treat impaired driving or “over 80” charges much more lightly than they ought. Especially those who have been convicted of such things, like a DUI, DWI, or drinking and driving, seem to think their crime is not criminal. As defense lawyers who have defended many people with charges such as these over the years, we’ve seen this crime minimized again and again.

But the fact of the matter is that impaired driving can have much more serious consequences for all involved than other “real crimes” may have. It may not have the malice and premeditation that is involved in a murder or sexual assault, but there’s no doubt about it — impaired driving is a real criminal offense that can hugely impact not only the one charged, but also potentially the lives of many others as well.

It’s a mistake to view impaired driving as anything less than a serious crime, as that is what it is. Minimizing it as well as its effects should not be done. Many seem to think that dealing with it in court will be a quick and easy process, but this is rarely, if ever, true. Impaired driving cases are actually quite difficult to defend in court as a lawyer. As a result, it’s absolutely necessary that anyone charged to hire and retain an excellent lawyer who has sufficient expertise and success in the area. The results of such a case will have lasting consequences on the life of one charged, so it’s important to take every measure.

Is impaired driving a serious offense in Canada? 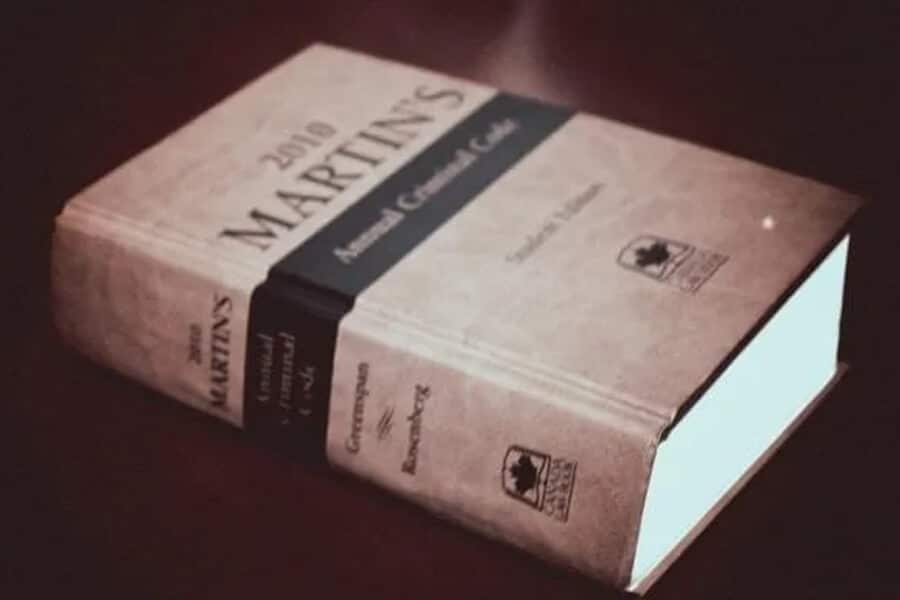 As I noted before, many charged with impaired driving are under the impression that the crime they’ve committed isn’t serious at all; in fact, some wouldn’t even think it shouldn’t be called a crime. However, all criminal offenses are serious, and this one is actually even more serious than others. The fact that the criminal sanctions and penalties put on people for driving impaired is quite a bit more severe than they are for charges one may think are “more criminal” further illustrates the gravity of the matter.

You’ll find that under Canadian criminal law, there are special types of sanctions and mandatory penalties that go along with impaired driving; all of these penalties and such are explained in detail under section 255 of the Criminal Code of Canada:

Everyone who commits an offense under section 253 or 254 can be convicted and is liable whether the offense is prosecuted by indictment or punishable on summary conviction. For the first offense, the fine is a minimum of $1,000 while for the second, the punishment is imprisonment for no less than 30 days. After the first two offenses, imprisonment will be required for 120 days at the least but no more than 5 years where the offense is prosecuted by indictment; when it’s punishable on summary conviction, the prison term will not exceed 18 months.

In addition, mandatory driving prohibitions are also included, and they are set out in 259(1) of the Criminal Code of Canada. It says that when an offender is convicted of an offense committed under section 253 or 254, the offender will have their license revoked in addition to any other punishments. For the first offense, this will hold true for 1-3 years at the most in addition to prison time and for the second, 3-5 years in addition to imprisonment. After the first two offenses, the license will be revoked and driving restricted for no less than 3 years.

Driving Suspensions and Sanctions by Province:

Apart from all that the Criminal Code of Canada sanctions on the matter, each province is at liberty to add whatever legislation and additional measures they deem necessary to restrain and punish impaired driving.

You’ll find that in Ontario, for instance, the suspensions and sanctions are as follows (taken from this Ministry of Transportation website): 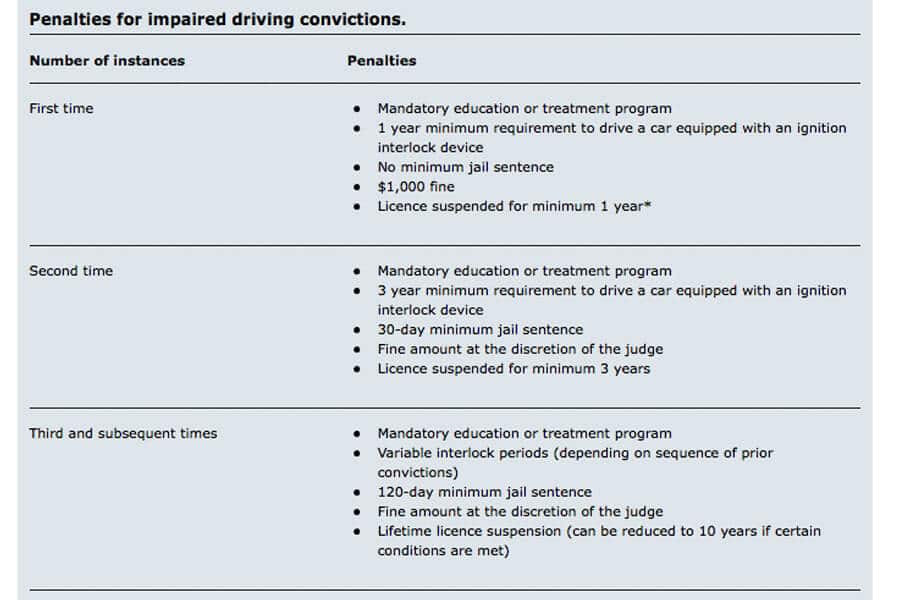 Once you’ve read through that, it’s clear to see that the legislature of Ontario takes this criminal offense very seriously. The ramifications are non-negotiable and very serious, greatly impacting the life of one charged.

The Definition of Impaired Driving in Canada

So what is considered impaired driving exactly? The Criminal Code of Canada defines impaired driving as anyone who operates a motor vehicle or vessel or operates or assists in the operation of an aircraft or of railway equipment or has the care or control of a motor vehicle, vessel, aircraft or railway equipment, whether it is in motion or not while their ability to operate the vessel hindered by alcohol or a drug or if one has consumed so much alcohol that the concentration in the person’s blood is more than 80 milligrams of alcohol in one hundred milliliters of blood.

In conclusion, it’s important that you realize that the above explanation is not thorough. We have done a brief analysis of the seriousness of impaired driving and what that could mean in Canada as well as specific provinces, but we’ve barely scratched the surface. There is much more detail and nuance involved.